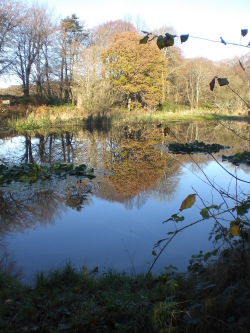 The Community of Rudbaxton lies immediately North of Haverfordwest and includes Crundale, Poyston Cross, Bethlehem, and Rudbaxton Water. Crundale forms the main residential area of the Community where there is ongoing housing development. The present population of the Community is circa 850 with approx 450 dwellings. Ongoing building developemnts has seen the completion of three new sites and a further one is progressing well. The completion of all these developments will increase housing by approxiamately 120 dwellings.

It is a popular area to live due to it's close proximity to the town of Haverfordwest, schools, recreational facilites, and Withybush hospital.

The village of Crundale has a Post Office with the Community Hall opposite. The hall is used by a variety of organisations both from inside the community and from further afield. It has a children's play area together with a Multi Use Games Area[MUGA] and a playing field.

The community garden is well established .Some further improvements are planned. The garden is particularly attractive in the Spring and summer but has interest throughout the year.

In addition to the Community Council there is an active Rudbaxton Community Association - www.pembrokeshirehalls.org.uk - ensuring that the hall and grounds are well used and maintained.

There is adequate car parking to cater for hall use and for recreational visits..

Withybush Woods is a popular area for walking and lies at the extreme end of the Withybush Trading Estate. It was once the grounds of Withybush House, but this has long gone. The woodland area has undergone clearance of undergrowth and selectied trees making it more open and enjoyable for all.

Adjacent is the Haverfordwest[Withybush] Airport which is mainly used by light aircraft and helicopters. Nearby is a hanger housing one of the few remaing Spitfire Aircrat of WWII. This is currently undergoing renovation and will become a static display open to the public. Within the airfield perimeter there are a number of commercial businesses and it is also the site of a regular Sunday market. The airfield is also the vemue of the annual Pembrokeshire Show.

General Sir Thomas Picton, a hero and casualty of the Battle of Waterloo, was born at Picton Hall in the Parish - now in private ownership. He was christened at Rudbaxton Parish Church where there is a commemorative plaque to his memory.

Other historic interests in the Community include: Rath Rings; St Leonards Well - a mediaevel holy well which has been restored; St Catherines Bridge which remains and is close to the site of the mediaevel St Catherines Hospice and Chapel. 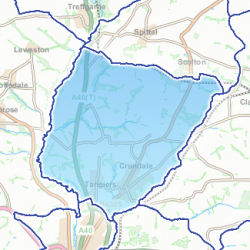