Narberth - Artistic view of the Town 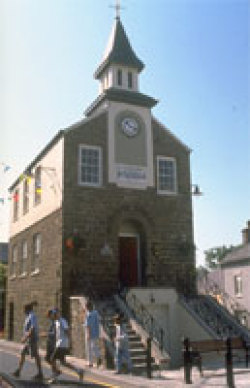 Narberth Town Council is the local council responsible for the town and immediate surrounding area of Narberth and Crinow. The Town Council serves as the main link between the people of Narberth and the county authority, Pembrokeshire County Council. The Town Councils' central role is to act in the interest of the whole community by making decisions and recommendations to improve quality of life and the environment. Consulting and listening to the residents to understand their needs, their wishes and their concerns is an essential aspect of the Councils' work often working in partnership with other organisations, including the voluntary and community sector.The 12 Town Councillors are unpaid local people, elected by Narberth residents, and have no direct affiliations to a particular political party, all stand as independents. These volunteers put themselves forward for election to represent the community and give their time freely and willingly for the benefit of the whole town.

Narberth is divided into two areas, Narberth Urban and Narberth North (which includes Crinow) Wikipedia states:- Narberth (Welsh: Arberth) (Population 2,150, of which a third are Welsh-speaking). It was founded around a Welsh court, but later became a Norman stronghold on the Landsker Line. It became the headquarters of the hundred of Narberth. It was once a marcher borough. George Owen described it in 1603 as one of nine Pembrokeshire "boroughs in decay". Narberth is a mile south of the A40 trunk road (on the A478) and benefits from a railway station on the line to Tenby and Pembroke.The town plays a high-profile role in Welsh mythology, where it is the chief palace of Pwyll, Prince of Dyfed, and a key setting in both the first and third branches of the Mabinogi. A drama specially adapted for children based on the story of Culhwch and Olwen from the Mabinogian was staged at Narberth Castle when it was reopened to the public in 2005. Its most famous son is possibly Sir Thomas Foley.

Attractions in the town include several art galleries, the Narberth Museum, the former town hall which still houses the cell where the leaders of the Rebecca Riots were imprisoned and a ruined castle. Narberth is well known for its range of independent shops, including a Daily Telegraph sponsored 'Best Traditional Business', national award-winning butcher, women's boutiques, gift shops and has developed a reputation as an antiques center. It was voted in 2013 as one of the 10 best places to live in the UK.

There are a number of civic events held each year, designed to reinforce the sense of community within the town. Narberth Civic Week is held during the last full week of July and begins on the Sunday with a parade through the town to one of the Churches, where a service is held to welcome the newly appointed Mayor. In 2008, the Civic Service was held in the grounds of Narberth Castle for the first time, by special request of the then-Mayor, Councillor Radford-Smith. During Civic Week, there are various activities arranged for children, families and visitors to the town. The culmination of Civic Week is the annual Carnival Day Parade, a tradition dating back over 100 years. Narberth's Winter Carnival, held in December, was revived in 2009, after a break of 4 years.

The town's cultural and arts centre, the Queen's Hall, has recently played host to live bands such as Therapy, The Blockheads, The Automatic, Sonic Boom Six, Skindred, Send More Paramedics, Pendulum and Enter Shikari. Concerts, plays and many classes, such as Kung Fu, yoga and line dancing are held there and it boasts a contemporary art gallery on the top floor as well as a restaurant on the ground floor.The Bloomfield House Community Centre is a Community association and a registered charity. Narberth and District Community and Sports Association is the parent body and the Centre offers a very wide range of educational courses, leisure courses and sports and fitness facilities. Bloomfield also has a day nursery, after-school club, Cylch Meithrin, Cylch Ti a Fi, day care facilities for older people and a community bus available for hire. Narberth is twinned with the English town of Ludlow, and both towns celebrate an annual food festival. 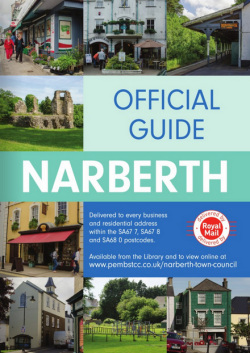 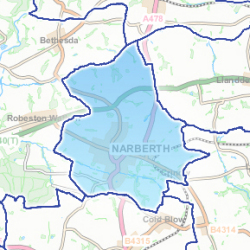