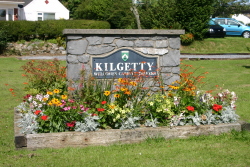 The wards of the Kilgetty Begelly Community Council (KBCC) cover Kilgetty (Cilgeti), Begelly (Begeli), Thomas Chapel and Reynalton. For many years spanning the 19th and 20th Century the area was known more for its industrial connection with coal mining. This is remembered today through the Miners Walk which follows the route of the former Saundersfoot Railway line (often horse drawn) which was built around 1830, to carry the coal.

Now the area is a well known tourist destination, there being popular caravan sites, B&B, Hotels and many cottages available as a base to see the beautiful county of Pembrokeshire. Kilgetty is often referred to as the Gateway to Pembrokeshire. The wider area being central to so many beaches and tourist attractions, including Folly Farm, Oakwood, Bluestone, Heatherton, Manor House (Anna's zoo) and many others.

KBCC is continually aiming to improve the area and one of the main achievements that it has been working on for a few years now is the new play area in Kilgetty. The new swings are particularly popular with younger children. A sub-group of KBCC is now working to develop a longer term improvement plan for the play area. Recent remedial work to some of the play equipment has now been completed. Begelly Kilgetty Community Association is also constantly working to maintain the delightful Community Garden nearby and there are many flower beds for residents and visitors to enjoy. KBCC has now also taken on responsibility for Begelly Play Area, including grass cutting, with new equipment to be considered by KBCC.

KBCC is always looking to source copies of old photographs of Kilgetty, Thomas Chapel, Reynalton and Begelly, including to display on this website page. If you do have any photographs of interest, please do send a copy to the Clerk.

All Councillors are Independent and are not affiliated to any political Party. See also Contacts sub heading above. Councillors can be contacted through the Clerk - or by email direct if shown - see details under 'Contacts'. The Register of Members' Interests 2017 is attached together with the monthly Declarations of Interests (where appropriate) made at Council meetings.

The Annual Precept for 2021/2022 for KBCC was agreed at £27,850- Future projects include installation of a play park in Begelly and a face lift to the Kilgetty Play Park

Annual Statement of Payments made to Members - 2019/20

Nil payments were made to Members in FY 2019/20; see return attached.

Work on the Annual Audit for 2019/2020 has been completed by the Responsible Finance Officer and approved by the Council - These have now been passed over the Grant Thornton for their consideration - Due to the current Government imposed restrictions the dates for public consultation are to be confirmed by the Welsh Audit Office.

At present the Council are holding meetings remotely via the medium of Zoom. These meetings are open to the public and if you would like any further information please contact the Clerk on the number above.

Useful links and other local information

To find out about news from Stepaside School, Kilgetty, please go to www.stepasideschool.co.uk