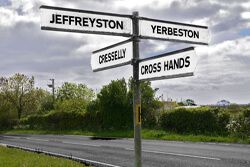 Jeffreyston is a rural community, the south-western portion of which lies within the National Park. The main village is Jeffreyston, with smaller settlements including Cresselly, Cresswell Quay, Loveston and Yerbeston. The community is largely landlocked, except where it abuts the upper reaches of the Cleddau estuary at Cresswell Quay. The community is predominantly agricultural, within a beautiful undulating landscape.

Historically, the area is associated with coal-mining, with small anthracite mines (first recorded in 1282) operating throughout the community chiefly during the eighteenth century. After the Loveston Pit disaster in 1936, where 7 colliers were drowned, mining came to an end. River trade via Cresswell Quay continued until the 1950s; remains of the Georgian coal quays and pounds can still be seen. The area is rich in heritage. Cresselly estate remains a major landowner, centred on the fine house built in 1769 for John Bartlett Allen, set within attractive parkland. Cresselly – derived from the Welsh ‘Croes Elli’ indicates an area of early settlement, and there is an ancient cross stone opposite St Oswald’s School at Jeffreyston(historically used as a coffin rest), perhaps dating from the sixth century. Jeffreyston, Loveston and Yerbeston were founded (or re-founded) during the Anglo-Norman settlement of the area. Jeffreyston and Loveston churches both have good Norman fonts of this period; otherwise the churches are later medieval, including their fine towers, and the Jeffreyston preaching cross.

The community supports St Oswalds Primary School, active churches at Jeffreyston and Loveston, and the cricket club at Cresselly. There are community halls at Jeffreyston and Cresselly, hosting a range of groups and events, including Mothers’ Union and the Young Farmers Club. In terms of hospitality, there is the renowned Cresselly Arms at Cresswell Quay, and the Jeffreyston Inn, which is noted for its cuisine. The community is well-served by a number of towns and larger villages in terms of shopping. There are several B&Bs, and there is a touring caravan park at Hungerford Farm. The Community Council meets monthly and aims to promote and protect the interests of all residents.

The 361 Bus Service covering Cresselly, Creswell Quay, Jeffreyston & Redberth was substantially reduced in January 2018 however there is alternative transport available in the form of Narberth Dial a Bus - Further information available from the Bloomfield Centre 01834 860293 Also, the Royal Voluntary Service Country Cars is available to any resident who does not have any other alternative -The service can be booked by ringing 01834 845307 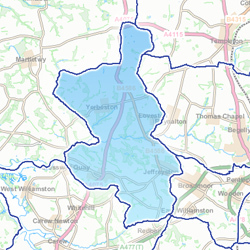