East Williamston Community Council is made up of the hamlets of East Williamston, Cold Inn, Broadmoor, Pentlepoir and also includes part of the historic parish of St Issell's. It is located in the south of the county close to Kilgetty and Begelly and East Williamston itself has been in existence for over 700 years with coal mining being present since 1620. Today the surrounding countryside is still riddled with shafts.

Broadmoor also evolved as a mining village and a short row of cottages built by the the owners of Greenhill Colliery are still to be seen in the village. Broadmoor is also famous for other occupations including the manufacture of bricks and pipes and concrete blocks and was known locally for its garage, established in the 1920's which sold bicyles and footwear as well as petrol and oil. The holiday industry has taken over from mining and Cross Park, for example, formerly the name of a pit is now a holiday park.

The village of East Williamston has grown considerably since the 20th century and has flourished in recent years into a very pleasant area to live being a quiet, picturesque village with good community spirit. The village hall was built in 1953 on land donated by Miss Jermin of the Brotherhill family and as the oldest inhabitant, presented the keys at its opening. It was rebuilt, however in 2000 with a Lottery Grant from the Halls for the 21st Century fund and is now a vibrant centre for local activities as such as short mat bowls, youth club and monthly quizzes.

Jubilee Park in East Williamston has been a triumph for community members who have seen it through from the purchase of the land over ten years ago to development of a play area, nature trail and an open space for recreation for all in the community. Today the park is wholly owned by the East Williamston Community and Hall Association and additionally, is held in trust by the Queen Elizabeth II Fields in trust, thus preserving this amazing amenity for enjoyment by the community for the next 100 years!

Cold Inn is made up of a group of houses and Ebenezer Chapel and the name is a local mystery as the public house that was situated here was known as 'New Inn' although the property was usually referred to in the parish registers as 'Gould or Gold Inn.' Cold Inn farm was the home of the Protheroe family who lived there in the early nineteenth century and still occupy the farm today.

WOULD YOU LIKE TO BECOME A COUNCILLOR FOR EAST WILLIAMSTON? IF SO PLEASE HAVE A LOOK AT THE INFORMATION PROVIDED IN THE LINK BELOW. (Right click on the link to open).

The Council is responsible for three playparks - one in the Jubilee Park, one in Pentlepoir and one in Broadmoor. The Council maintains the equipment and the grounds of the parks and if there are any problems or issues at the parks please contact the Clerk (Jane Clark) on 07980 303996.

Three public access defibillators have recently been installed - one in East Williamston on the outside of the Community Hall (funded by friends and family in memory of the late Debbie Hight), one on the outside of the bus shelter at Broadmoor (funded by EWCC) and a third on the bus shelter opposite the entrance to Hill Rise in Pentlepoir (also funded by EWCC). 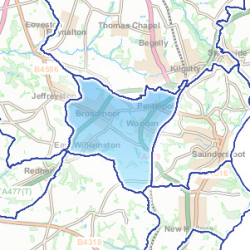