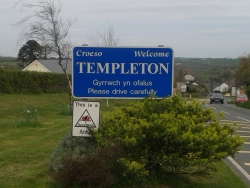 Templeton is a small rural village situated in Pembrokeshire, West Wales. The civil parish for Templeton and district is known as Narberth South. It was formed from part of Narberth in 1863, shortly after Templeton Parish Church was built.

Templeton village still shows its medieval roots, its long single street being fronted by small farms and houses. There is a large village green with two churches and church halls.

The village encompasses the hamlets of Cold Blow, Allensbank, Woods Cross, Peters Finger, Molleston and Mounton. Mounton was once a parish in its own right but due to de-population it has been absorbed into Narberth South. The name is thought to derive from the Order of Templars which may have had a religious house in the area. The current community of Templeton is relatively small at present but will see an increase due to new developments in the future.

The community is predominantly made up of sparcely populated farmland, with over four fifths of its population in the two settlements of Templeton and Cold Blow. The majority of community services are located in the village of Templeton including a church/village hall, primary school, playgroup, public house and a soon to be newly upgraded play park. There are also several industrial units and a caravan park. The main artery route is the A478 which runs through the centre of the community from North to South.

The church hall attached to the village green is a well know hub of the community with many events held there, including keep-fit, coffee mornings, sewing classes, zumba as well being available for parties.

The Community council has nine members whose aim is to provide a service to the residents of all in the ward. We meet on the 3rd Thursday of every month (except August) and any member of the public is welcome to attend the meetings. For queries, please contact the Clerk - details on the contact page. 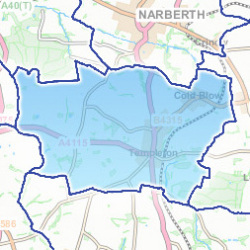