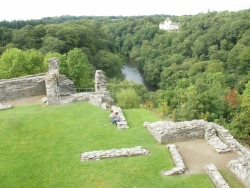 Cilgerran is on the northern border of Pembrokeshire between St Dogmaels and Cenarth, 3 miles south of Cardigan. The village is linear in nature and stretches along the south bank of the River Teifi, well known for salmon and sewin, where coracle fishermen still practice the ancient trade.

Cilgerran is famed for its picturesque castle, which dates back to 1100 and stands overlooking the point where the Plysgog stream joins the River Teifi. Today the castle features two wooden bridges that cross the defensive ditches to the south side. Two circular towers remain and much of the inner keep walls. The castle is owned by the National Trust.

The village is noted for its annual coracle races which date back to 1950 and attract competitors from all over the world.

To the west of Cilgerran village is Cilgerran Gorge where 3 slate quarries once flourished, with quality slate being exported through the nearby port of Cardigan. It now provides an interesting landscape.

Nearby is the Welsh Wildlife Centre which stands within the Teifi Marshes Nature Reserve. With its glass and wood building that won an award for architectural design in 1993 when it first opened. There is traffic free walking and a cycle path across the marshes where wildlife can be observed.

Cilgerran Village Hall is a thriving village amenity well used by local people in a wide variety of ways.

Ysgol Cilgerran School is a Welsh medium school in the heart of the village and is committed to providing a high standard of education.

Another attraction on the outskirts of the village is the smallest museum in Wales. An old BT red phone box that has been transformed by the Language and Heritage Committee into a museum dedicated to local photographer Tom Mathias.

The oldest building in the village is the Pendre Inn which was once a coaching inn and dates back to the 14th century.

Inside the churchyard of St. Llawddog Church is a megalithic standing stone (or Ogham stone) where ogham inscriptions can be seen.

The community of Cilgerran includes the parishes of Bridell, Llantood and Rhoshill.