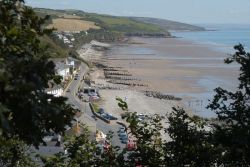 Amroth is a village east of Saundersfoot known for its long sandy beach and excellent water quality. The beach, which faces south towards Tenby, Caldey Island and The Gower, stretches the length of the village which itself is well served with shops, pubs and places to eat. Amroth is the begining (or end) of the 186 mile Pembrokeshire Coast Path.

A mile north is the hamlet of Summerhill. Its centre includes a former primitive Methodist Chapel, now a private residence, a bus stop, and public phone box. Its focal point is the busy Parish Hall which opened in 2009 and is the venue for many local clubs and societies.

Just down the road is the tiny hamlet of Wisemans Bridge, straddled along a deep sided, wooded valley and south facing towards a part rocky, part sandy beach. With a good pub on the beach, Wisemans Bridge is popular with visitors.

Between Wisemans Bridge and Stepaside is the picturesque Pleasant Valley, a delightful wooded valley with a small river running through it. In the 19th Century it was home to several coal mines and the Iron Works whose ruins can still be visited today.

Stepaside village boasts a rich industrial heritage too. Legend has it that it was named by Oliver Cromwell who ordered his troops to 'step-a-side' when en route to Pembroke Castle. It is an easy walk from Wisemans Bride through Pleasant Valley.

Llanteg, in the parish of Crunwere, is situated to the north of Amroth and is home to the 13th Century St Elidyrs Church. It is transected by the A477 from St Clears to Pembroke Dock but still maintains a close knit community. Its village hall is central and well used.

Meetings are held on the third Thursday of the month at 7.00 pm alternating between Amroth Parish Hall and Llanteg Village Hall. There is no meeting in August. The public are welcome to attend. 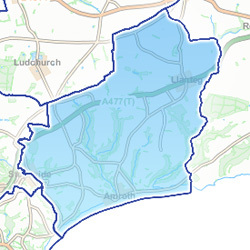